MacKinnon's Cave at Gribun, the deepest cave in the Hebrides 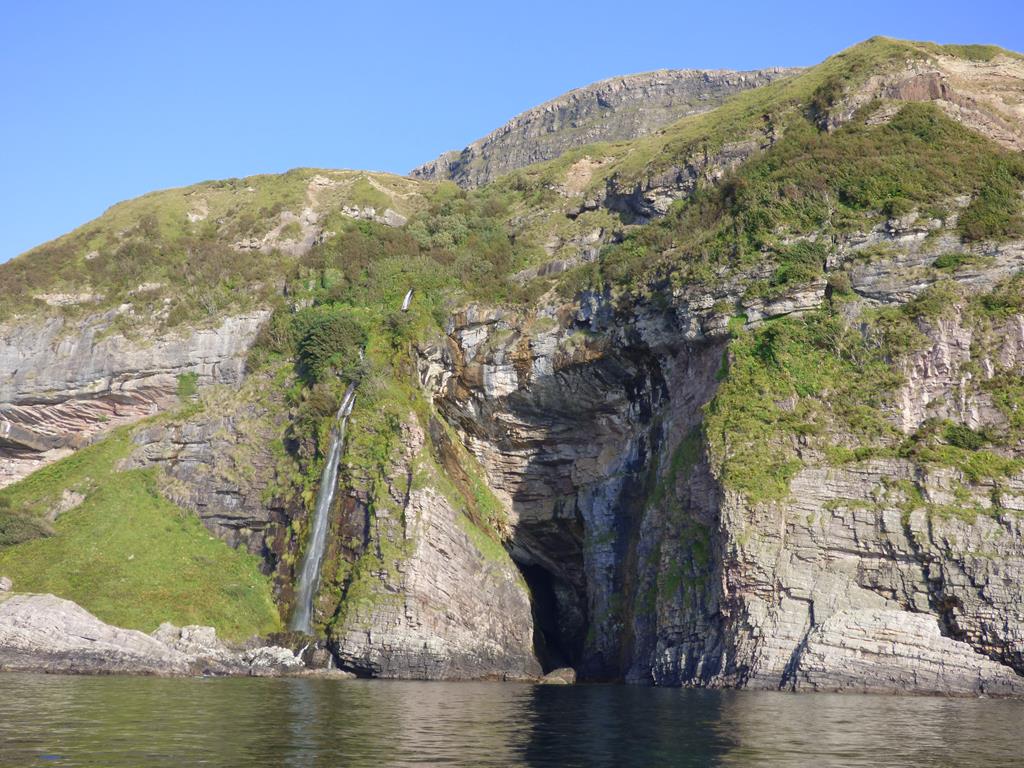 Mackinnon's Cave Gribun the deepest cave in the Hebrides 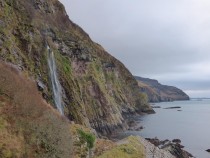 Waterfall before the cave

MacKinnon's Cave is the longest sea cave on the west coast of Scotland. The walk to it is fairly short, boggy in places, however it is extremely difficult near to the cave where the walker has to be fit to contend with and clamber over large awkward slippery boulders as well as allowing  good timing to reach the cave and return safely; the cave is only accessible at half tide to low tide..(study tide tables before you set off). To explore the cave's depths a couple of torches is an essential part of your equipment. The reward to the walker is superb coastal scenery,panoramic views of the islands off the west coast of Mull, interesting geology and history, and the chance 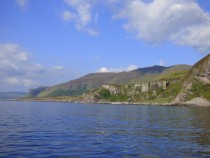 to see eagles and otters and exploring a geological wonder of the Isle of Mull, the cave itself. Along with the isles of Staffa, Iona, and Inch Kenneth, the cave was on the route of Boswell and Johnson's Grand Tour of Western Isles in the 1770's.Follow in the footsteps of these famous tourists! 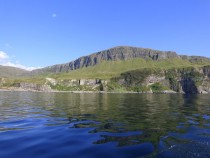 From Seaview bed and breakfast drive 19 miles east along the main road the A849 and after passing the village of Pennyghael turn left at the top of Loch Scridain on to the scenic route signposted for Salen , the B8035. Drive for approximately 10 miles, firstly west along Loch Scridain, then north through Glen Seilisdair and eventually winding down through the Gribun Cliffs, turning left near the bottom of the hill on to 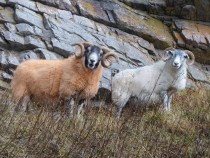 ewe and tup watching us on the way to the cave

the Balmeanach road in a southerly direction. Drive a short distance past a bungalow and fields to a sign posted car park on the right hand side of the tarmac road. A visitor map at this location give information about the walk, which is only possible if the tide is at least half out to low water. Please check the tide times for the area accurately and it is best visiting  the cave when the sea is still receding. Do not attempt the walk on a half to high tide situation 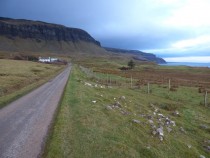 Commence the walk by leaving the car park and continuing along the tarmac road south to Balmeanach Farm, keep to the left at a junction as signed and then go through a gate and climb a track to the left of a field fence. At the fence corner turn right and continue along the track with the fence on your right. The path can be boggy and wet however the worst can be avoided if you stick to the stones of an old dry stone dyke. After this the track improves as a track from the fields meets you! Continue on following the fence as the track turns left.There are magnificent seascapes to the Treshnish Isles, particularly the Dutchman's Cap which looks like a giant submarine, Iona ,Staffa, Inch Kenneth,Tiree,Coll and Ulva. Behind you there is the 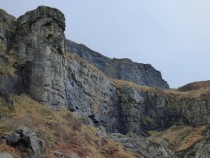 basalt cliffs on the way to MacKinnon's Cave

grand backdrop of the magnificent Gribun Cliffs  which at times can look sinister if the sun is not on them. Now go through an old Iron gate on the right and follow down a wide, shallow ,grassy ,small valley for a short distance then continue to the left. 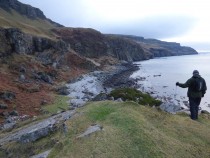 From here looking west along the coastline there is a dramatic seascape view of cliffs, rocks and lashing waves continuing into the distance, of which the centre piece  of the scene is a high waterfall. The path goes down the side of a cliff over a slab of bed rock to reach the top of the shore and the beginning of a rocky bay. Walk across the top of the bay, on your left passing two giant blocks of collapsed cliff. Walk on until just after a low section of the cliff that falls on to the beach, however instead continuing under and over a barricade of large boulders on the beach near to the waterfall, climb up a little to the left to a grassy area and 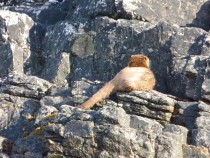 Otter relaxing near the cave

pick up a sheep path just above the boulders and just below the cliffs for a short distance until you are standing beside the waterfall. 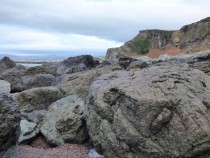 The next area is flooded by the sea for at least half of the day so as mentioned before pick your tide times carefully. Continue over slippery boulders to reach an inlet immediately after the falls. The magnificent impressive large entrance to MacKinnon's Cave opens out to your left. Enter the cave with your torch and explore the twisting 500 feet long cave, 90 feet high cave entrance with three chambers and three distinct levels. At the rear of the cave if you switch off your torch you will not see your hand in front of your face as no daylight penetrates this area. The

conglomerate rock on beach to cave

cave at the back is stoney with sand and the roof allows you to stand up in most places. There is a small stalagmite/stalagtite geological feature in the cave, see if you can find it! 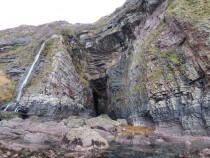 the cave and waterfall at low tide

Boswell and Johnson came here in 1773 using a candle for light and measured the cave length with a walking stick. A local legend states a piper and his dog were lost in the cave. Only the dog emerged from the 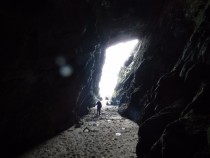 the deepest cave in the Hebrides!

cave  without its hair. There is a flat table like slab in the cave nick named "Fingal's Table" giving the cave a mystic feel to it. Legend has it that in ancient times the cave was used as a refuge for hermits and the table was used as an alter.

The geology you pass on the walk takes you from top to bottom of the geological column, you can see tertiary volcanics above to the SEA LEVEL psammite basement rocks at the cave.