Former fishing village Kintra and the crofting township of Braighcreich

A short easy walk to a peaceful valley and deserted island township near to Seaview bed and breakfast. Waterproof boots highly recommended! Kintra meaning Gaelic for 'end of the beach'

OS explorer 373 Iona, Staffa, and the Ross of Mull 1:25000 Distance: 3 miles Time: Approx 2hours  Click on images below to enlarge 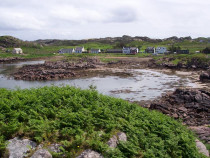 Kintra village the start of the walk

You are on a grassy hillock with good views to the west and north west of the Isle of Iona, Treshnish Isles, and Staffa. To the south is the desolate moorland of Creich. Walking a 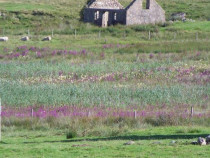 short distance you follow a wall between two houses east down a grassy slope. At the bottom of the slope turn right through a gate. On your left you can see the stone track running east to Braighcreich a deserted, peaceful but well preserved township.

Go through the gate follow the track and the first ruins are on your right 50 metres up the hill. Consisting of 4 separate buildings using the local red granite stone lying around for 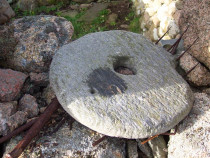 construction whilst also clearing the ground for agriculture ( this applied to most of the croft houses at this end of the Ross Of Mull.)  On one of the window openings there lies a grinding stone.

Continuing along the track on either side of you there is much evidence of cultivation, typical of small open field townships organized around 'runrig' (township divided into rough areas of land known as runrigs or rigs shared out between townsfolk and sometimes the landowner), a communal system of farming, labour intensive, cultivating lazy beds often with hand tools, which formed the basis of runrig. 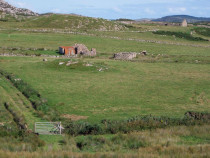 The track to the ruins of Braighcreich

Lazy beds were cultivation ridges where the soil between the ridges was turned into ridges. This area has many small rigs of land divided by stone and earth boundary walls with lazy beds within. The best preserved house ruin appears to the left of you on a hill just before the dry stone dyke and gate. This ruin probably was a double cottage for two families and from here you have a fine view west down the valley towards Creich and Iona.

Now continue east through the gate in the centre of the drystone dyke. 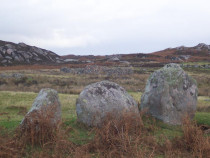 At the centre of the township at the side of the track are three stones locally known as 'Father, Son, and Holy Ghost'; the belief was that outdoor rituals were held here and was most likely to be the township meeting place. 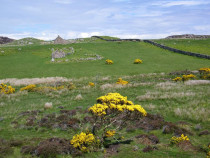 The fields and Ruins of Braighcreich

Another few hundred yards walk and you arrive at the last ruin Gortain-a-ghibain set below Beinn Chladan which lies to the south east of the valley. This ruin has the open fireplace intact and is used by sheep as shelter.

On looking west from here down the valley, you can see the newer township of Creich distinctively set against Braighcreich a township from the past. On this walk you might see, The Duke of Argylls Irish mountain hare, introduced by one of the dukes and a different species from its cousins on mainland Scotland! 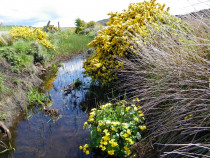 In the bogland to the south and east you will see meadow pipits and skylarks. Birds of prey include buzzard, hen harrier, merlin and kestrel. Ravens are also seen. Some of the bog plants that can be seen were used by the town people as medicine. 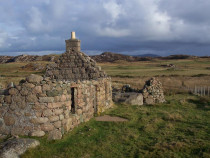 looking east up the braighcreich glen

At the end of your walk return by the same route or head east onto the moor beside the fence and join the track to Camus and Market Bay. Approximately 1 mile further on. Please note both walks combined turn this trip into quite a hike and you might need to arrange to be picked up at Camus road end.   Camus and Market bay walk read more

back to walks on Mull page