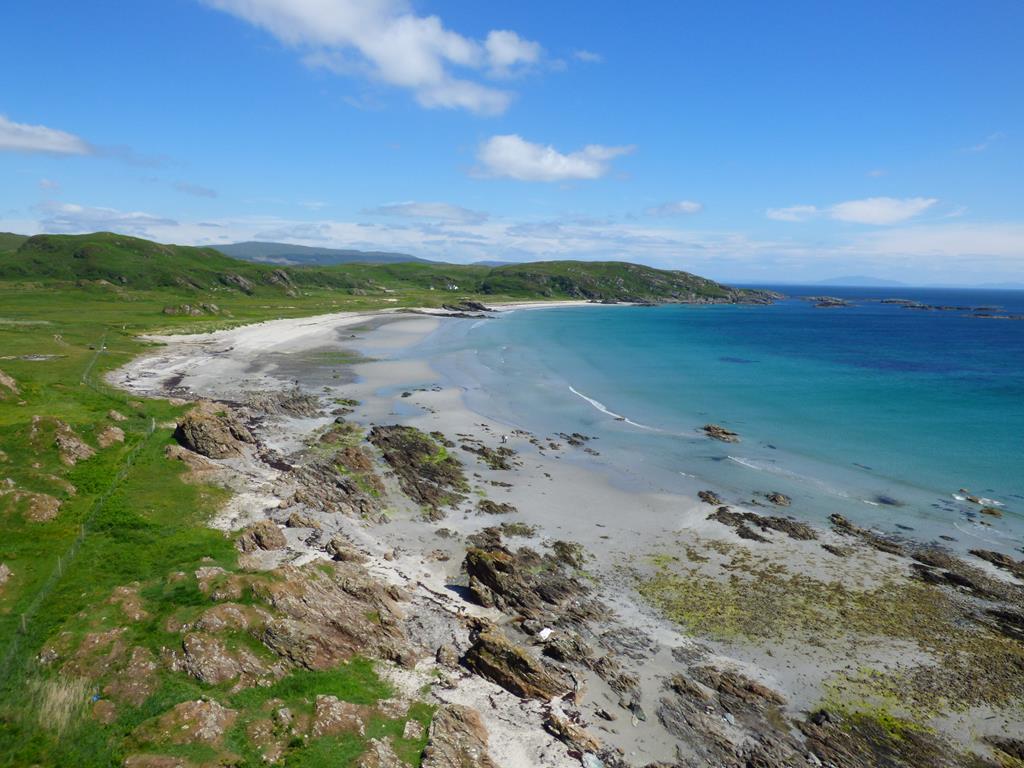 Wonderful Ardalanish Beach from the Dun of the Grassy Field 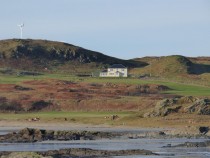 Ardalanish Farm from the east end of Beach 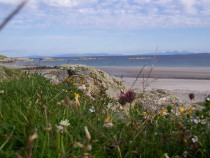 Uisken Beach is a picturesque sandy cove with rocky islets, a ruined crofting township and a stone  hill cairn with dramatic views of the isolated and rugged  Ross of Mull shoreline and the islands of Scarba, Jura, Colonsay and Islay. 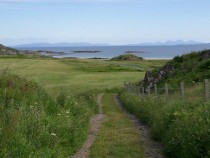 A reasonably easy walk in general, however if the walker chooses there is a steep scramble to the top of the fort with sheer cliffs on the north, south and east sides, beware! stout walking shoes or boots required. The walk can be enjoyed without climbing to the fort top.

Walk start point is at the un surfaced car park at  OS NM 374 194 between Ardachy Hotel and Ardalanish Farm and Weaving Mill. 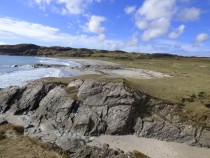 Ardalanish walking to the west

From Seaview drive east on the main road A894 for approximately 4 miles. At the signpost for Uisken follow the sign and fork right at the houses, drive for about 500 yards and turn right at the small junction. At these junctions there will also be signs for the weaving mill. Drive south for just over a mile and turn right at the Ardachy Hotel and Weaving Mill sign. On passing the farm steadings and hotel on your left, the next exit on your left is the entrance to the un surfaced car park, the start of the walk! If you do not take this exit a few hundred yards further on you end up at the Ardalanish Farm Weaving Mill. 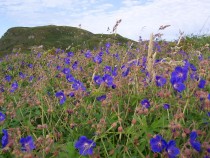 Wild Gentian at the top of Ardalanish Beach

From the car park walk through the south east facing metal farm gate and follow the track south towards the beach. There are good views across the fields and bay to Colonsay and Jura. On the verges to the left and right of you in  late May,June and July there is an abundance of wildflowers. Pass through the second pedestrian gate on the track and keeping the field fence to your left and the wee burn to your right continue to the top of the beach. If the sheep and cows 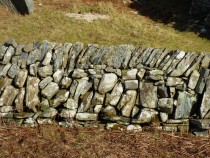 have been taken away from this area in time there is a magnificent variety of wildflowers in this area. On your left  to the north side of the nearest hillock, between the fence and hillock there is a fine display of wild Blue Gentians in late May early June. 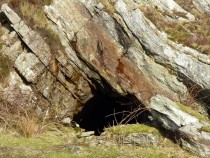 Turn left on reaching the beach in an easterly direction ,keeping the fence and fields on your left walk approximately 100 yards to the third field stile in the fence. Go over the stile into the field (dogs on lead at all times rabbits and sheep in the fields!) and head in a north easterly direction towards a rocky outcrop until you see a field gate in a fence in front of you. Go over the stile in the fence to the right of the gate and go to the point of the rocky outcrop and explore the Baptists Cave. The entrance is easily seen in the winter but hidden by bracken in the summer so a little more searching in summer is required! When found the opening is large and you can go inside.

In the early 1800s  a baptist school teacher and his family and followers lived,taught and worshiped at the cave until about 1845 when a change of heart by the locals and Argyll Estates permitted the construction  of a permanent church in the area. From the cave go back to the fence, follow it east towards a white cottage until you come to an upright ancient standing stone. A rough schist slab with a rounded top. Another stone lies on the 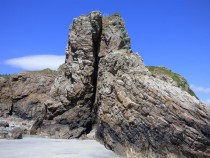 ground about 8 meters east and is made of sandstone. Grid reference NM 378 188. 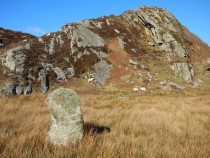 Return back over the stile and make for the field gate, go through it on to the beach and turn left (east) and walk to the end of the beach where there are two interesting features.

The first is man made, a magnificent  dry stone dyke or wall bordering the beach from the shore to the cottage above. The second is the natural geology, grey metamorphic schist vertically layered rock. The shiny bits on the rock is the light reflecting  off the surfaces of the flaky minerals called Mica; biotite, black mica and silvery muscovite mica. There is also a black rock called Amphitobite. The rocks contain three important minerals, kyanites, sillimanite, and andalusite. This area offers an opportunity to observe all three minerals and geologists from far and wide come to study then. The area is a site of "Special Scientific Interest." 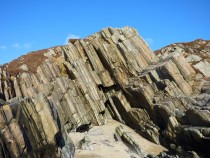 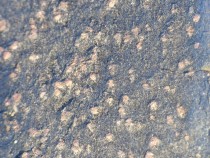 From the east end of the beach walk  along the extensive sands to the west end. On your way look out for a variety of seabirds; oyster catcher,ringed plover,and common gull nest on the beach whilst migrants: Turn stone, Godwit, dunlin and sanderling can be seen in spring and autumn. Limpets,edible winkles, can be seen on the rocks, razor fish and sand eels  are in abundance in the sand, all can be eaten.

Look out for common and grey seal, and with luck and patient watching  you might also see otters.

As you walk along the sands to the west end, the headland stretching out in front of you from the beach and bordering the bay is called Rubh Ardalanish, which means promontory of the white point. The point behind you at the east end is Aird Dubh or Black promontory. 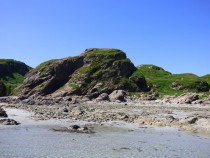 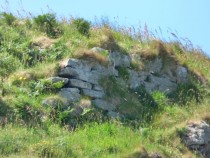 Wall at the top of the Fort or Dun Cliffs

The remains of an Iron Age Dun stands overlooking Ardalanish Bay. Cliffs to a height of almost 100 feet form the fort on three sides. Approach the fort from the south west side which is ridged but less steep. Near the top there are remains  of a wall on the north west and south east sides. Best to see the walls from the foot of the cliffs with binos. For the nervous or inexperienced walker it is safer not to climb to the top of the fort, beware. For the adventurous and fit the view from the top is fabulous overlooking Ardalanish Bay and you can understand why it was used as a meeting place, look out post and for defence.

Behind the fort and beach on the west side is Ardalanish Farm, organically managed with a weaving mill the lands overlooking the bay. Native 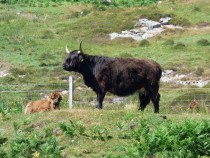 breeds of Kyloe cattle and Black hebridean sheep can be seen in the fields. Visit Ardalanish Farm and Hebridean wool mill after your walk. 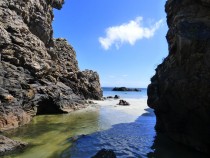 on the same OS map as above. Distance approximately one and a half miles. 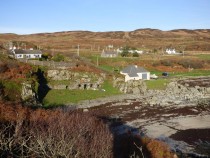 The walk on the beach is an easy walk however the short walk to the cairn is more strenuous, a short rugged walk.Park at the beach car park located at the west end of the beach. 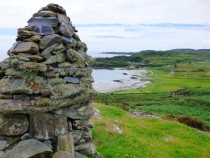 By car from Seaview follow the directions above for Ardalanish Beach however instead of turning  right at the Ardachy Hotel and Ardalanish weaving mill signs continue south on the existing road for approximately half a mile to the road end and the car park at the beach.

From the car park walk east to the opposite end of the beach. As you walk you will see a stone cairn on a ridge in front of you. At the end of the sands, go across  the stile in the stone wall and head up the path over the rocks in front of you. Scramble carefully for the first 30 yards. The rocks form big natural steps, after this walk up the sheep track to the Cairn. From the cairn the crofting township of Uisken is below you to the west and north and to the north on the hillside above the ruined crofting township of Am Fan. Looking to the south there are superb views of the isles of Colonsay, Jura and Islay. 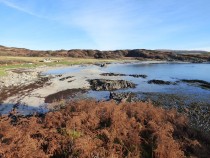 Islanders walked great distances to bury their dead with many a resting place en route to "toast" the life of the deceased. Eight men would carry 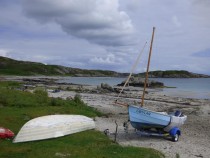 The sands of Uisken Cove

the coffin.with others taking their turn. The cairn overlooking the beach marks the spot where funeral possessions on their way to Kilvickeon burial ground would rest. Each member of the funeral  party would add a stone to the cairn. It is known as "The Last Look Back.

Retrace your steps carefully to the beach and back to the car park on the other side of the beach. 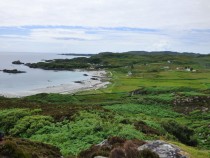 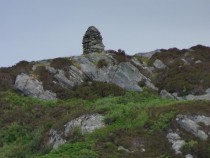 Grid reference 387189 The west side is the access point, a grassy slope, all other sides there are rocky cliff faces providing strong natural protection. The Dun is roughly oval shaped and measures about 30 meters by 15.5 meters within a single stone wall. On the north west wall there is a more modern rectangular enclosure.

Uisken translates as "Little Water" and was a place where whisky was distilled illegally and there are many stories of the locals evading the excise men. Crofters in the past supplemented their income by salmon, lobster fishing and weaving. 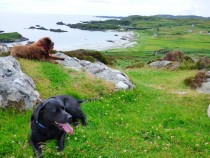 The beach is a good place for wading birds, ringed plovers, eider ducks, divers in winter, in summer, the odd corncrake can be heard and perhaps 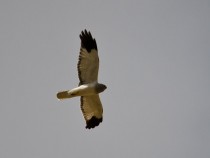 seen. The croft land behind the beach holds linnets, yellowhammers,sky lark,grey lag and white fronted geese,  swallows, house martins, siskin, linnet, green finch and gold finch. Kestrel,sparrowhawk, merlin  and hen harrier are on the look out for prey. There is also one or two chough in the summer, just about as far north as you will see them.