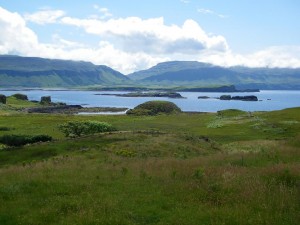 the Isle of Ulva to Balemeanach

Mull in the county of Argyll,is the fourth largest island in Scotland the second largest island of the Inner Hebrides, lying off the west coast of Scotland. It is the easiest and most accessible Hebridean island for  visitors to access, only a 45 minute ferry crossing from mainland Oban, which in itself, is only 2.5 to 3 hours by car from Glasgow Airport. Train and bus connections  from Glasgow are regular offering spectacular scenery on the way from Glasgow to Oban connecting with the Caledonian MacBrayne Ferries leaving Oban for Craignure on Mull. The Isle of Mull is served by three Caledonian Ferry routes to the mainland, Oban being the main one with all connections. 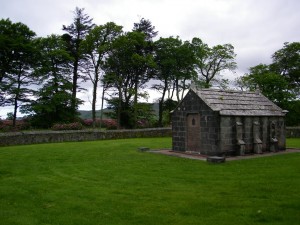 Governor of Australia a Scot from Ulva buried here MacQuarie

The Vikings had a presence on Iona and Mull until the 1300's and many place names are evidence of Nordic influence, Many raids were carried out by the Vikings particularly on Iona which was an important place of culture,learning and prestige in the days of the Kingdom of Dalriada. The western seaboard of the Hebrides was the motorway of its day stretching from Orkney to The Isle of Man and further, hence all the castle ruins around the area, where territory was frequently being fought over.

In the 1300's Mull became part of the Lordship of The Isles, ruled by Somerled and subsequently the MacDonalds. At the end of the 1400's the Lordship failed and subsequent Clans MacLean and Campbell ruled the roost Today you can see the historical evidence in the form of forts and castles, most of them ruined now, but one fine rebuilt Castle Duart of MacLean sitting on a grand strategic point overlooking The Firth of Lorne, Loch Linnhe and The Sound of Mull. 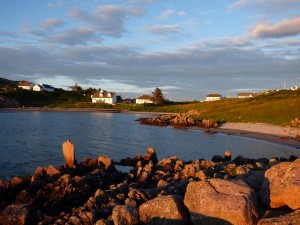 In the late 1700's for 100 years the infamous highland clearances took place and the population decreased from 10000 to less than 4000, many inhabitants setting sail to the America's,Canada,New Zealand and Australia, Today there is an ever increasing number of Genealogy tourists coming to the Isle of Mull from these countries to trace their roots.

Mull a land mass of 337 square miles, a wild and spectacular coastline approximately 300 miles long and a resident population of approximately 2,800, the Isle of Mull is "THE COMPLETE HEBRIDEAN EXPERIENCE" having everything all the other hebridean islands have to offer individually but all on one island with the famous isles of Staffa and Iona as fabulous additional bonuses and more - spectacular walking and scenery, Ben More, an island Munro you can climb from sea level to its peak; stunning complex geology eg Isle of Staffa and The Carsaig arches, Ardtun Basalt Columns and Fossil Beds, The Treshnish Isles, ancient and mystic standing stone circles, superbly diverse satellite islands, fabulous white beaches, historic remote Stevenson rock lighthouses, Skerryvore and Dubh Artach ,rare wild flowers, a whisky distillery, Golden Eagles, sea eagles, otters, corncrakes, hen harrier, short eared owl, whales dolphins and sharks; historic and romantic castles,pipe and ceilidh bands, and additional gems such as the satellite islands - world famous Isle of Iona with its historic, spiritual Iona Abbey and the spectacular Isle of Staffa with wonderous Fingal's Cave and it's breathtaking basalt columns. 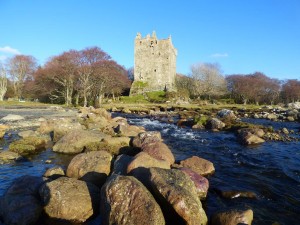 Seaview is situated at the centre of this  Hebridean experience, in the heart of Fionnphort village and is the nearest bed and breakfast to the boat trips to Iona and Staffa and also Wild about Mull land based wildlife tour led by wildlife expert Bryan Rains. We will happily book all these Mull tours for you. Come to Mull and taste the fresh local produce Mull beef,lamb,pork,fish and shellfish in restaurants such as The Ninth Wave,Cafe Fish,The Keel Row Hebridean Pub,The Fionnphort, Creel Seafood Bar and experience Hebridean hospitality at its finest..
Ceud Mile Failte ( a hundred thousand welcomes)