Fishing on the Ross of Mull

In the late 1700's a new village at Kintra on the north west tip of the Ross of Mull was constructed by the 5th Duke of Argyll to promote the fishing industry, and who tried to provide an income for himself and his tenants through fishing. Fishing communities at Creich and Catchean nearby to Kintra were also developed.

In the mid to late 1800s bad management, transport difficulties and the distance to the markets meant the scheme failed. The nearby Tormore and Deargphort quarries  then provided employment for the village people. When the quarries closed families emigrated and some were evicted. In the 1920's only 2 people lived at Kintra. The village is now repopulated with a few local families.

Kintra is very picturesque and is worth a visit.

Salmon stations using nets was another seasonal fishing activity carried out around the Ross of  Mull coastline employing a number of seasonal workers in the summer months. In 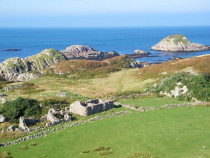 the 1990s for a variety of reasons the stocks decreased and at the same time the market was depressed with the arrival of cheaper fish farmed salmon making the traditional fisheries uneconomical. Sadly there are no working stations now.

The now accepted farmed salmon is an entirely different product to the wild salmon - most folks who have tasted both would prefer the wild species on their dinner plate! The main fishing on the Ross of Mull now is commercial shell fishing with baited traps (creels) for lobsters (homarus gamarus), edible brown crabs (cancer pagurus), Prawn (Norwegian Lobster) and velvet swimming crab (necora puber).

However, before the late 1960s shell fishing with creels was generally carried out on a seasonal or part time basis allied to crofting, farming or another shore based job. Small boats today still operate this way. 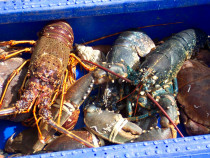 Lobster, crawfish and crab fruits of the sea Fionnphort

In these days generally only lobsters were caught in season around the coast and then transported “dry” to Oban or Mallaig, very often by the fishermen themselves on their own vessels. Eventually some of the lobsters would land in Billingsgate with the fishermen often standing the loss of the deaths before arrival at market.

The creels used then were generally made by the local fishermen. Fish box wood formed the  base, hazel wood formed the frame, which was then covered with knitted, tarred twine. The creel was weighted with a flat stone.

It was baited with small fish caught with hand lines. The boats used were small open day boats with oars or small inboard engines and the creels were mostly hand hauled. 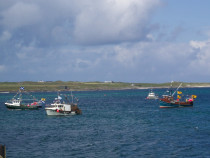 In the early 1970s a few local inshore shell fishermen went fulltime and larger 40 foot Lobster and crabbing vessels were built to exploit not only lobster but deeper water crab fisheries in summer and winter, creating an all year round fishing activity. These boats employ up to 4 or 5 men most of the year, and the boats work 7 days a week.

In the 1980s small inshore boats also expanded a new velvet crab fishery for markets in Spain and France. These boats had a fast outboard engine and a petrol creel hauler allowing the fisherman to haul many creels in a day dramatically improving efficiency. A further labour saving and safety measure method recently employed is a self shooting table, where the crew are not involved with throwing the creels into the water, this is done automatically and the fisherman's feet and legs are kept away from the outgoing ropes.

To allow the transport of “live” shell fish, “vivier” lorries were introduced. These are specially adapted container lorries where lobsters, crabs, velvet crabs, and Norwegian lobsters or prawns are kept alive by passing oxygen through holding tanks of water keeping the catch alive during transportation all the way back to France and Spain. Early on Monday mornings at Fionnphort and Bunessan piers there is great activity when the catch is landed and loaded into the lorries. It is well worth a look! 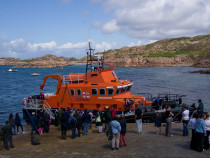 From August to November, edible brown crab is landed by the larger vessels at Fionnphort in the evening on a daily basis and is transported to processing plants on the mainland by a local business. 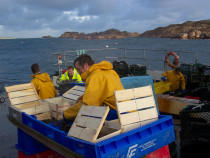 Around 10 fishing vessels directly and indirectly employ about 20 people including ancillary services out of a working population of approximately 100. These include 40 ft vessels working up to 40 miles offshore in the summer months for crab and lobster, to 19ft single manned day boats working velvet crabs and lobster around the shoreline. Also medium sized vessels fish in the sea lochs in the deeper water for Norwegian lobster locally known as prawn, and is a high value catch. One vessel dredges for scallops which is another highly sought commodity.

The crab is bought by a local buyer who transports the produce across Scotland to the east coast to the crab factories where it is processed and sold in tins. It is from the local fishermen pier at Fionnphort where John used to fish for crab and lobster that we now make our own purchases for the seafood platters that we serve at Seaview. 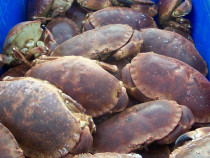 Fishing used to be a vital mainstay of the Ross of Mull economy, however in recent years the challenges of maintaining a sustainable industry are beginning to take its toll. There are fewer boats fishing out of Fionnphort and Bunessan than there were ten years ago in 2000. It has become harder to earn a full time living from fishing and there are less young people wanting to try fishing and so less people seeking employment