» Attractions » Walks on Mull » The Burg and Fossil Tree

Kilfinichen Bay near to the start of the Burg walk a sea eagle and otter hot spot! 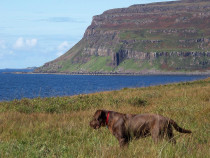 Burg was bequeathed to the Trust in 1932 by Mr. A Campbell Blair of Dolgelly, and was one of the first properties to come into the care of The National Trust for Scotland. The outstanding natural history and geology of this 617 hectare property are recognised by its designation as a National Scenic Area. 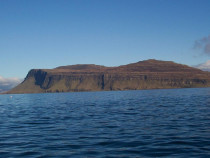 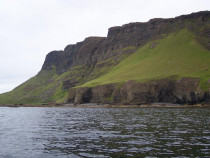 Burg Cliffs near the Fossil Tree

The remarkable volcanic features displayed along this coastal area represent the eroded edges of a succession of horizontal lava flows from a great volcanic complex in the centre of Mull, active around 50 million years ago. The broad table-topped hills of the islands of Staffa, Lunga and the Dutchman's Cap (a few miles to the north-west) and the distinctive step formation profile of Burg were formed during this period. Detailed references are made to specific features in the walk information which follows. 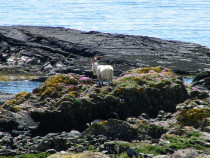 The volcanic rocks of Burg have weathered to form rich soils suited to wildlife and agriculture. Grassy slopes support many varieties of wild flowers, such as wild thyme, grass of parnassus, gentian, wild carrot and northern bedstraw. Where bracken has invaded the grassland, NTS Conservation Volunteers work to keep it at bay, with help from grazing cattle. Red deer and feral goats forage on the hillsides of Burg, keeping the vegetation relatively short. This gives ideal habitat conditions for butterflies and moths, both rare and common. 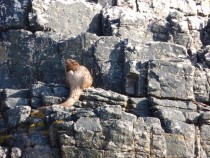 Butterflies such as small copper, dark green fritillary and the common blue and painted lady can be seen, as well as the transparent burnet moth, with its striking black and crimson wings. Along the paths through the bracken look out for the chimney sweep, a tiny black moth with white wing tips, and on sprigs of heather you may find the northern eggar moth, with distinctive eye spots on its wings to ward off hungry birds.

Birds such as meadow pipit, stonechats and wheatear nest in the scree slopes close to this plentiful food supply. Buzzards are common, hunting on rabbits and other small prey, and ravens are also resident, cleaning up carcasses of red deer or goats fallen from the high cliffs. 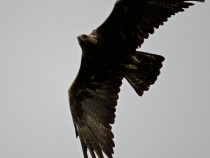 Bryan gets close to the illusive Golden Eagle 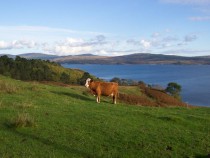 journey south for food and rest. Golden eagles and Mull's famous white tailed eagles are often seen above these cliffs, circling on the thermals. Along the shore, the native otter and the introduced North American mink can sometimes be seen, together with oystercatchers and rock pipits. 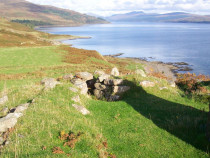 There is evidence of human activity on Burg dating back to the Neolithic period.Dun Bhuirg , the remains of an Iron Age dun or fortified house with defensive earthworks still visible in places, sits above the site of two Bronze Age burial cairns at Port na Croise.

Well-preserved remains of sheilings originating in medieval times and built turf walls can be seen at Airigh nan Caisteal. Around the present-day bothy and corrugated iron house at Burg extensive remains of an earlier township and its associated cultivation are evident.

A WALK AROUND BURG 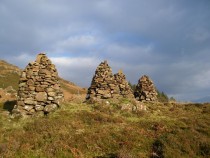 Follow the track from the NTS car park to Burg Farm (about 5 miles). Not long after leaving the car park at Tiroran is Scobull School, originally built in 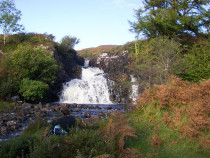 Bonnie waterfall beside the track Tavool

1898 and remained a school until 1946. Four cairns about a mile and a half from the car park mark the spot where the coffins of past generations of the MacGillivray family were rested on the way to their burial at Kilfinichen (east of Tiroran). On either side of the track, though perhaps hidden by bracken during the summer months, the ruins of several deserted villages can be seen. It is estimated that the Ardmeanach peninsula was home to around three hundred people during the 19th century and the ruins of their dwellings still remain. Lazy-beds, the wide ridge-and-furrow pattern on the landscape around the settlements, are the last remnants of the agricultural system which supported this population. 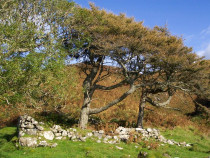 Cullimore Ruin Tavool, a peaceful picnic spot on the way to Burg

At Tavool, a little less than a mile from Burg Farmhouse, the track veers left through a gate at the edge of the wall around the garden of Tavool House. 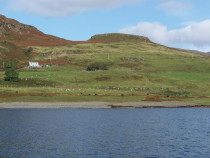 Less than a mile further on, Burg Farmhouse sits above the end of this easy track, as the way begins to become rough and uneven in places. The small house with a sloping roof just after the farmhouse was built in the 1880s for the late Chrissie MacGillivray's parents. It is now a National Trust for Scotland bothy. Chrissie MacGillivray lived in Burg all her life, and became the local representative for The National Trust for Scotland at the time the property came into the Trust's care. She is fondly remembered by local residents and regular visitors to Burg. On the hillside behind the bothy, the remnants of ancient woodland can be seen with many trees growing in unusual shapes blown by the prevailing winds. 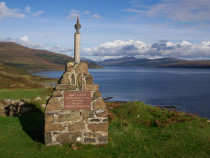 Continue heading west past the bothy, passing close to the site of the Iron Age defended farmstead of Dun Bhuirg. A monument erected by John Hamilton Turner, a former proprietor of Burg, has a touching inscription to Daisy Cheape. At this point the track winds down to the beach level, following a grass-covered flat showing traces of earlier cultivation. The path rises again where the hill slope closes in on the beach, and for the next half mile is narrow. Care is required where the track crosses scree and in a few places where it has slumped down the slope. 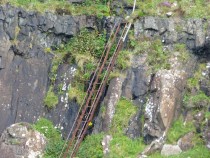 Iron Ladder to the beach before the Fossil Tree

Towards the end of this section some interesting rock formations begin to appear on the beach about 100 feet below the track. At two places the typical columnar structures of the basalt lavas have opened out like the sticks of a fan. Another is circular with columns radiating outwards like wheel spokes. It is possible to reach the shore here, via a stream beside a steep rock rib, although this is impassable at high tide, when the sea reaches well up the rock and bars all progress. There is another route to the shore, continuing a few hundred metres along the cliff top path until reaching a steel ladder attached to the cliff. The approach to the ladder is steep and visitors must exercise extreme care and caution if taking this route. It is not advised for anyone suffering from vertigo or afraid of heights. 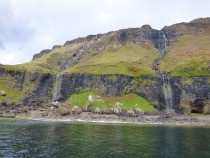 Waterfalls before the fossil Tree

Once on the shore again, the beach is relatively easy going until it becomes littered with huge boulders eroded from the upper cliffs, some of them pitted by cavities with quartz crystals. The cavities were originally formed by gas bubbles within the lavas, subsequently filled with silica-charged solutions which percolated through the rocks and crystallised on the walls of the cavities. Pebbles of agate (a variety of quartz) may be found in the beach shingle, where they have eroded from the rocks by sea action and weathering.

Just beyond the second of two waterfalls, in a cove at the end of the beach, lies the Fossil Tree, first noticed by John MacCulloch in 1819. All that is left of the 50 million year old tree is its tall impression in the cliff, with the small remaining section of the 'trunk' capped with cement intended to preserve it. The general distortion of the surrounding rocks indicates that other trees were overrun by the lava flow and remains of three trees have been found in the vicinity. Visitors are requested not to chip away the parts of the remaining fossil: the two-inch coating of charred wood lining the impression at the time of discovery has steadily been destroyed by souvenir hunters. 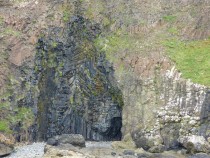 The Trust's property extends for some distance north of the tree, but the route around the next headland in this direction is negotiable only 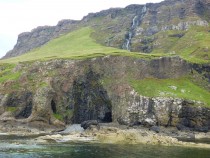 when the tide is at its lowest. There is a route to bypass the headland, but it is advisable only for those who are experienced and properly equipped for this hazardous terrain. To access this path, it is necessary to return to a wide stone-shoot a few hundred yards south of the Fossil Tree, where a steep goat track zig-zags uphill to the left of the shoot, then traverses the slopes above the coastal cliff. This poorly defined track crosses the upper stream beds of the twin waterfalls and eventually descends a steep crumbly slope to the wide bay beyond the headland.

At the end  of a shingle beach, a sheep-fank marks the beginning of a stretch of shales containing an abundance of fossils. The low headland, Aird na h-Iolaire (point of the eagle), is the Trust's northern boundary: beyond lies the area named 'The Wilderness'. 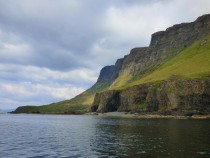 The Wilderness beyond the Fossil Tree

The distance from the car park at Tiroran to Burg farm (5 miles) then on to MacCulloch's Fossil Tree (a further 2 miles) totals almost 7 miles, and due to 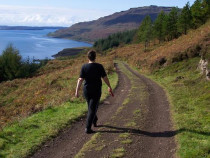 striding out towards Tavool and Burg

the rough terrain, visitors should allow 5-6 hours for the return trip. Strong foot wear must be worn. Part of the path lies below cliffs and during and after stormy weather rock falls may occur. It is recommended that walkers have a copy of Sheet 48 of the Ordnance Survey 1:50,000 series of maps or Sheet NM42/52 O.S. 1:25,000 or  a copy of Map O.S. Explorer 375 Isle of Mull East.

An emergency telephone has been installed close to Burg Bothy, allowing calls to be made direct to the emergency services or to the Trust's regional office in Oban. Remember mobile phones will not necessarily receive a signal at this location and generally only O2 and Vodaphone will receive a signal on the Ross of Mull peninsula.

The National Trust for Scotland was established in 1931 to promote the care and conservation of the Scottish landscape and historic buildings, while facilitating access for the 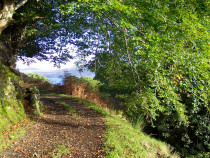 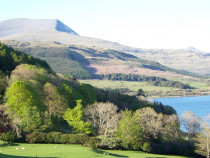 public to enjoy them. You can support the valuable work of this charity by becoming a member, making a donation or arranging a legacy. Further information can be obtained by contacting The National Trust for Scotland.

back to Walks on Mull Page