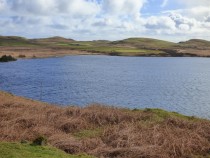 A day out exploring the southern coast of the Ross of Mull. Grand cliff top views, remote beaches, and an abandoned Highland township 15 minutes from Seaview Bed and breakfast accommodation. Click on images to enlarge 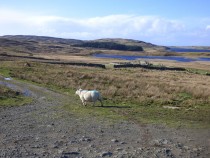 The starting point lies 2 miles south of the village of Bunessan on the Ross of Mull. From Seaview bed and breakfast travel eastwards along the A849. On leaving Bunessan take the sharp bend at the east end of the village and drive up the hill. At the hills crest, turn right at the sign for Assapol and Scoor. Travel along the tar road past Loch Assapol. Open and go through the gate onto a dirt track road but be careful of the odd pot hole. Follow the road up the hill and park at the side of the track (car park marked) opposite Kilvickeon cemetery You are not allowed to take your car any further. The church is situated in the fields to the right (west) below you. 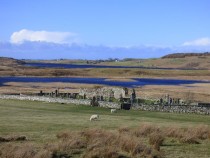 From your car turn west off the main dirt track and walk down the small track to the bottom of the 1st little slope. Turn right through the gate, across the field to Kilvickeon church and cemetery. This site can be seen all the way down from the car park 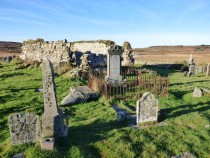 This is the only medieval parish church dating from the 13th century on the Ross of Mull, of which there are many worthwhile remains. Believed to have been built on a pre-existing Christian site, Kilvickeon translates from the native Gaelic as 'Church of the son of Eoghan' - Eoghan was a nephew of St Columba. With Iona, the cradle of Christianity, so near at hand many of the missionaries would have passed through the area as they went off on their travels spreading the Gospel to other island townships. 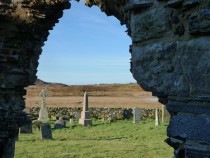 Kilvickeon from the Reformation onwards was linked or united with many other local parishes on the Ross of Mull, ending up as the Parish Church of Kilvickeon with Kilninian which served the whole Ross of Mull, before its final demise in 1804 when the present Parish Church in Bunessan was built. We know from the First Statistical Account (c 1792) that the original building had been in dire straits for some time. Today, the ruin stands in the midst of its burial ground, in a bleak and windswept part of the island, but with an atmosphere all of its own. There is still the occasional burial today, the last one being 2015. 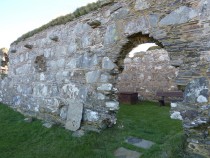 The church architecture resembles the architecture of St Orans chapel on Iona. The arched entrance to the church is still there on the north wall. The original door of the arch must have been secured by a drawbar as the deep socket onto which the bar slid can be seen on the right hand wall of the arch. To the left of the door above you is a piece of carved sandstone, now weathered. It could have been known as what was called a  sheel na gig read more, a lewd or suggestive figure placed on a wall as a mark of defiance. There are only 5 of these symbols recorded in Scotland, another of which happens to be at the Iona Nunnery. 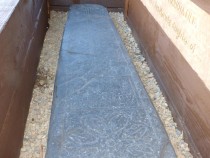 Inside the church there is a tombstone lying flat in a box upon which the words HIC IACET MARIOTA FIL IA… (here lies Mari(o)a, daughter of….) are inscribed. This is known as theMariota Stone - carved on it you can just make out the shape of an early sword. For a personal view of the church yard visit The Hazel Tree read more

The Mariota Stone is one of the oldest of table tombs and headstones in the cemetery. It dates to approximately to 1500 AD. It is beautifully carved from west highland slate with flecks of Iron Pyrite. A superb example of West Highland Medieval Sculpture. The persons name is inscribed on the stone which is unusual and the carvings provide a cultural picture of the times 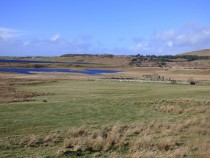 The stone was repaired  in 2009 by historic Scotland  and returned to the church in 2012, housed in a wooden shelter for its protection. The Church and graveyard was made an Ancient Monument in 1999. The repairs to the church were completed in 2015 to protect whats left with help from Historic Scotland.

To the north of the chapel is a man made loch called Harrison s loch a haven for ducks, waders, whooper swans and otters. The area is  is ideal for spotting hen harriers, sparrowhawks, Kestrels and the occasional  sea eagle. 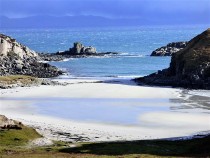 Return to the track turn right and continuing down in a southerly direction you come to picturesque Kilvickeon beach divided by an island at low tide. A splendid spot for a family picnic and swim or a beach comb. Often all along this coastline you can see wild goats whose descendants would have been domesticated but after the clearances the goats were left to fend for themselves and became feral. 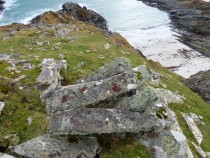 Dun a Gheard Fort and beach 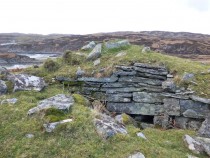 hills then bearing south west round the foot of the bigger hill for a few minutes  here is a fine example of an Iron Age Fort or Dun at the top of a wee hill overlooking a sandy cove, beach of the fort. Dun a Gheard ( Fort February) with inner and outer walls, and steps clearly visible near the top of the hill.

Mull Walks Port Bheathain or Bay of the Thumbs 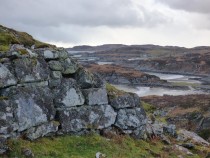 A bit further to the west from here you can see sandy cove called Port Bheathain a lovely spot today but the site of a historic and bloody battle between Mull MacLeans and Mac Phees of Colonsay.

A follower of MacLean was murdered in Glen More the perpetrator fleeing to Colonsay, Mac Lean demanded the murderer was returned to Mull to be tried. The Colonsay men instead killed him and deposited his body ashore on the Ross of Mull.

This led to a feud. When the MacPhees returned to Mull to steal cattle, the MacLeans ambushed them and as they retreated into the sea with their boats the MacLeans cut off their thumbs so that they were unable to row their boats and they were slaughtered. 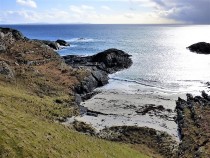 Beach of the fort

The bay is known as the "Bay of the Thumbs". It is said after the battle that the MacLeans gathered 9 buckets of thumbs and toes! Return the way you came. 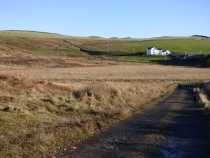 Return to the main dirt track at the top of the hill and turn right following the road to Scoor House, leaving your car at Kilvickeon car park. Go left past the front of Scoor House through the gate and follow the track through the field to the gate at the top of the field. You are now in the top field, follow the track past the sheep fank on your left, go through the gate and follow the track to the high point in front of you (east). On looking left, north east, you will see a fire break in the forest across the valley. Head along the ridge towards the fire break  Soon you will spot the track to the deserted township of Shiaba below you. Follow the rough path through the moorland watching out for grouse and birds of prey as you go. Soon you see the gable end of a building with other ruins around it sitting on a fertile grassy mound above cliffs. This is Shiaba a Scheduled Ancient Monument, and an old township with some of the most fabulous views. 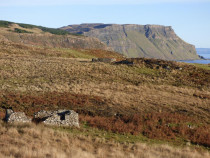 Over three hundred and fifty people lived here at the end of the eighteenth century and the remains of their dry stone round-cornered houses, byres, lazy beds and boundary walls marking their croft lands can be seen. There is a water mill and two drying kilns. The first ruin on the right coming down the track before the burn was the schoolhouse. The last house to be occupied is the square cornered house on the hill with its gables intact. A shepherd and his family lived here until the 1930 s. 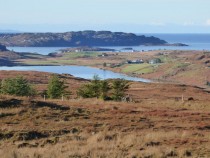 In 1841, 126 people lived in 22 cottages, by 1881 two old and ill people remained. John Campbell, the Duke of Argylls’s factor raised rents, took the people’s pasture land and forced them from their cottages, not only in Shiaba but throughout the area. His cruelty and harshness aroused ill feeling and hatred that is still felt today in the memories of the Ross of Mull people. Although the ground was agriculturally good in Mull terms, between potato famine, too many people to feed and the unsympathetic landowners agent who wanted the land for more profitable sheep and forestry the people were  pushed to either poorer lands around Bunessan and area or sailed to the new world on th e emigrant ships 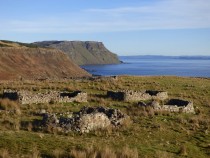 The Highland clearances came and the emigrant ships took people away from the beaches below. Follow down past the houses to the deer fence near the shore and follow it east back up the hillside. Here you are likely to see deer, eagles and wild goats. At one point you are fairly near the cliff edge so please be careful of your footing! Continue onto the high ground and look east across to the 1000ft cliffs at Malcolm's Point with the Carsaig Arches just visible at their foot. The scenery and atmosphere is so special to this area that you are likely to stop often and gaze in wonder at it all. The seascapes in the distant south and east are that of the islands of Islay, Colonsay and Jura. This is a walk John and Jane have done on a handful of occasions with Megan and Lainie and enjoyed many a picnic amongst the ruins enjoying the sunshine 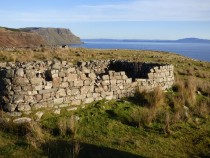 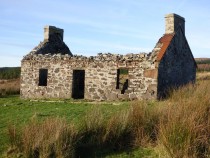 last mile back to Scoor House. Alternatively when you reach the top enclosure fence at the sheep fank follow the fence south to the sea cliffs turn right (west) for a short distance and you will find   the trig pillar. From here you can see a whole host of islands: Islay, Jura, Scarba, Lunga, Luing, Mull, Colonsay, Staffa, Coll, Tiree and Iona. Below you is the superb sandy cove called Scoor beach. If the wind is not in the south it is a lovely sheltered spot for a summer picnic. There is also golden eagle activity in this area 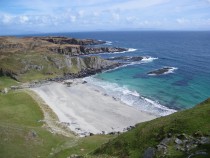 From here you can either return back up the fence to the gate at the top of the fields and follow the track down to Scoor House or alternatively follow the coast west and then north west through fields to the cottages below Scoor House onto the road and north along the road to your car at car park above Kilvickeon Chapel. Drive back to the main road 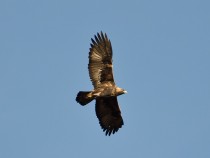