A short rugged coastal walk along the scenic Fionnphort White Sands. Enjoy stunning seascapes and views to the Isle of Iona and  historic Abbey and explore the history of the Tormore Quarries. 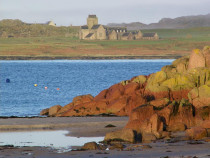 Leaving from Seaview's white gate, cross the main road and walk down the e wee road opposite Seaview. At the bottom of the hill on the left is Fionnphort beach. On the right you will find the old graveyard, still occasionally used, which has interesting granite steps outside the boundary wall which were used for mounting your 'trusty steed' in times gone by. Fionnphort's (meaning white beach or port) beach has white sands with a large split rock in the centre of it. At low tide you can walk to 'Fingal's Rock', where legend has it that Fingal the giant (who stayed here on his journey from Ireland to Staffa), woke up one day in a poor temper, picked up the rock and threw it in the air and smashing it onto the bed rock which caused it's present day split. From the beach you can see a panorama of the Village, pier, Iona and the Abbey. 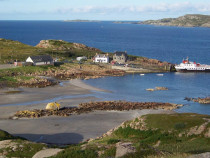 view from Tor Mor hills of Fionnphort Pier and Bay

Crossing north from the beach, walk across the back of the beach and climb up the rocks onto the hillside passing the 'big rock', and pick up a rough but well worn path (sheep trail) heading around the coastline from the far side. The path soon becomes clearer as it weaves between rocky knolls, always staying some distance from the sea. It is very wet underfoot in places. Take time to look around and admire the increasingly spectacular views of the pier, beach, Iona and Abbey.

Continue following the trail over a burn and up and through the craggy and rocky landscape. You are basically following a sheep trail - keep the coast and sea to your left. You will eventually start to descend quite sharply - mind your footing the track can be wet and slippery at times. 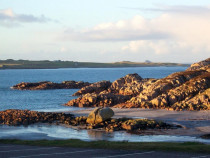 There are a couple of blue arrow way markers along the route but they are easy to miss especially during the summer months when the bracken has grown nearly 6 feet tall. As the trail starts to descend down to Tormore there are three houses visible by the sea -two are holiday homes and one is home to a resident. On the left there is a lovely sandy beach and to the right is the pier used for taking the pink granite from the nearby quarry.

Near to the Tormore pier and above the sandy cove, hidden amongst the rocks is a cave called 'The Cave of the 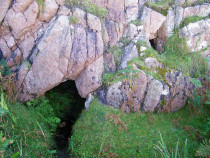 place to shelter in bad weather for the final journey of burial to Iona. The sandy cove is an idyllic spot for a picnic and a wee snooze on a sunny summer's day. 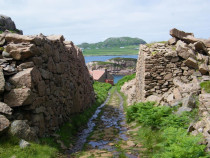 At the partially ruined Tormore Quarry Pier you look across Bull Hole to 'Eilean nam Ban' (Island of the Women) where it is said Columba banished women from Iona because he thought they were troublesome! The anchorage of Bull Hole to the north is a safe anchorage for the Iona Ferry and local fishing boats in the area.

From the old pier follow the track uphill, eastwards and into the quarry. This track had a tramway which carried the quarried red granite down to the waiting boats at the pier to be exported all over the world. At the top of the track, climb the steep granite steps taking care with the 'makeshift' handrail or take the easy route and carry on along the track and round to the top.

The quarry (READ MORE) contains the magnificent red granite which is unique both in colour (almost pink) and also that large slabs can be quarried without any flaws or cracks, and when polished makes superb facing stone on buildings. 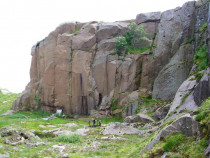 There is a sample of the polished granite on the gate pillar at Seaview. This stone, which the Abbey and Seaview were built of, was used all over the world.  On top of the hill 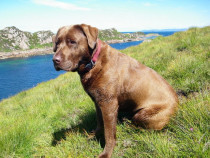 above the quarry you have a spectacular panoramic view of Iona, Staffa, Erraid, the Ross of Mull, Tiree, Coll, Jura, Islay, Little Colonsay, Gometra, Ulva, north west Mull and the Burg on the Ardmeanach peninsula.

After taking these breathtaking views proceed south out of the quarry and down the hill following the sheep trails back to Fionnphort village.  Alternatively you can walk the longer road route back and go through the metal fivebar gate signposted The Ninth Wave Restaurant (Mull's 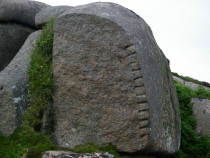 Destination Restaurant) and walk the track down past The Ninth Wave and Bruach Mhor, to the bottom of the track, through the gate and follow the road round turning right onto the main road. Fionnphort Village is just a 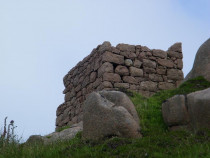 back to walks page