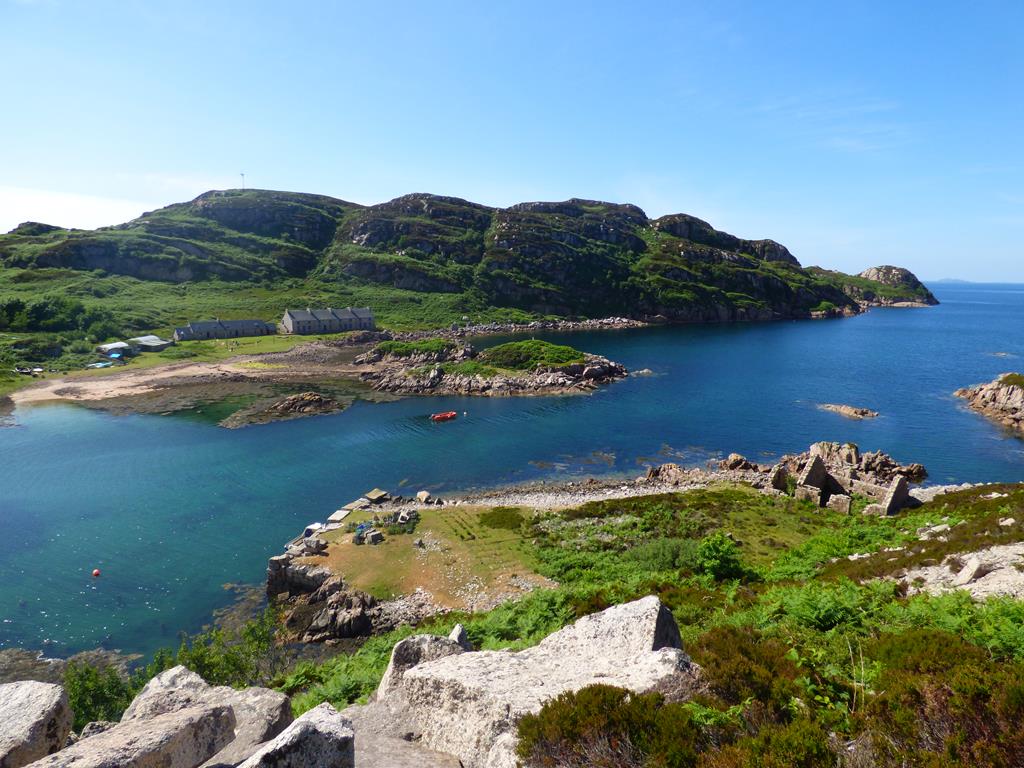 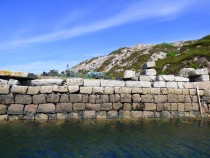 A short walk across open moor land on the Ross of Mull to a narrow bay, a bonnie quiet spot with historic quarry cottages,lighthouse quarry and a picturesque remote beach

Car required. 5 minutes drive from Seaview B and B on the A849 travelling eastwards towards Bunessan. Approximately 200 yards before the Esso garage at Ardfenaig on the left hand side of the road, there is a small shed, gate and track. This is your starting point. Stout footwear is recommended 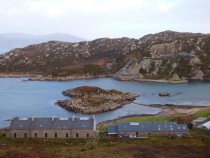 On leaving the road, cross the footbridge and go through the gate and onto the track. Head northwards on the track for approx ¼ mile. The track at first is hard with small 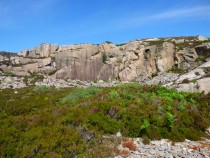 stones as a base however it eventually narrows and becomes grassy with walking boards to step on. On either side of you are pleasant, rolling, grassy fields of Ardfenaig. At the end of this stretch,about 700 yards go through a second gate gate. The track bears right across open peat bog moss, moor land on both sides. The track and moor land become wet and muddy in the winter but generally dries out in the summer. After ½ mile the track trails to the right through hilly outcrops and then a splendid wall (built in the "Galloway" style) borders the path on your right down to Camas Tuath. At the start of the dyke on your left is the path to market bay which can be done on the way back(see later) Now cross a wide footbridge and you will soon see the Camas buildings. A gap appears in the wall on your right,go through and as you walk south east look left and you will see the high point across the bay, grid reference 355242. This is your end point but you have to go round the creek and salt marsh. Go to the right of the rock outcrops in front of you. Follow the sheep tracks and cross  over the salt marsh where it is dry enough. A waymarker points you through a narrow gap on to the hill. Follow sheep tracks north passing the quarry on the left on your way up. Carry on to the trig point where the views to north Mull, the islands and the Ardmeanach Peninsular are stunning. Retrace your steps to the Galloway Dyke and Market Bay Trail. 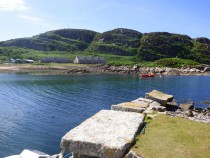 Camus bay has two small tidal islands and two Quarry mans' Cottages which the Iona Community lease as an adventure camp. It is accessible by a 1.5 miles (2.4 km) walk down a 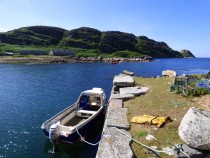 moorland track and by boat. Activities run at the centre include kayaking, abseiling, hill-walking, raft-building, fishing, juggling and arts and crafts.
Camas has an organic garden that over the years has been taken care of by different resident gardeners. The bottom garden has a poly tunnel and inside grows lettuce, tomatoes and other vegetables. The bottom garden is also home to many different herbs and sometimes fruit. As you move up the garden there are seaweed beds which grow carrots and other hardy vegetables. A great effort is made to be organic! There is also a garden shed and igloo made from willow and a small shed hidden within the trees.

The Camas Centre has two buildings built over 160 years ago for 150 quarrymen that were renovated in 2006 when mains water was added, a 6 kW wind turbine and an Aquatron (composting toilet system) which turns human waste into compost using composting worms. During the renovations the Centre was closed to the public and the right of way was closed as the site was dangerous. Now that Camas is re-opened it welcomes up to 28 guests a week and offers activity weeks, themed weeks and open weeks. 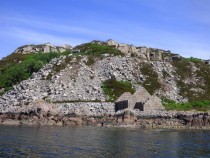 As mentioned before the disused quarry is on the opposite side of the bay and can be reached by walking east along the shore and crossing at the head of the inlet then walking down the other side of the lagoon. John takes his boat from Fionnphort, it is easier!, From the old quarry above, the disused tramway leads down to a superb granite block pier where from 1839 4,300 rough granite blocks, rough cut after being blown with dry powder from the granite quarry face, some weighing up to 2 tons were exported by boat  to Tiree , 25 miles away, finely cut there and thereafter by boat 12 miles south of Tiree  to Skerryvore reef to build Alan Stevenson's famous lighthouse opened in 1844.

The granite here is not as pink as that of the Tormore quarry, and also has a coarser texture. The granite was used to build Skerryvore Lighthouse which sits out in the Atlantic approx 30 miles west of The Ross of Mull, pounded by the severest storms since 1844. The lighthouse was designed by Alan Stevenson (one of the "Lighthouse Stevenson's") uncle of the writer Robert Louis Stevenson. It is believed to be the most elegantly shaped lighthouse built, shaped in a hyperbolic curve, 48 metres high, 97 courses of block, 14 metres at the base tapering to 5 metres at the head to withstand a force of 240 tons..and is still operating today! The stone was also carried by boat north of Mull to Ardnamurchan point to be finely  cut and fitted for Stevenson's most westerly mainland lighthouse, Ardnamurchan. The quarry was worked until the 1850's . 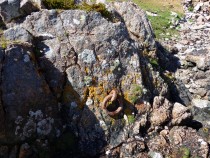 Boat tie up ring in rock at Camas quarry pier 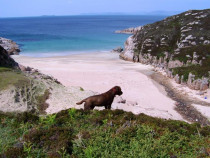 Camas is a peaceful spot, ideal for a picnic. On looking north you see panoramic views of North Mull, Ulva and Little Colonsay. If you are quiet on arrival you may see seals and otters playing in the bay. You return home the same way as you came. As you retrace your steps along the path, just before the Galloway dyke on your right, just before the last hillock there is a rough path to MARKET BAY. Follow the path North west at the bottom of the high ground, the open peat moor will be on your left.  The walking is rugged and wet in places with the defined track often disappearing from time to time. On arriving at the grassy hillocks follow the path north beside the small burn, watch out for the peat bog in places and go down a gentle slope until you see the short machair grass and two wonderful sandy beaches ahead of you.

Traigh na Margaidh (Market Sands) is one of a very few sand beaches on the north coast of the Ross. It is one of the most scenic and secluded sandy bays on the Ross of Mull with magnificient views to Staffa and North Mull. The Royal family used to picnic here and perhaps "skinny dip" when they cruised the Hebrides on The Royal Yacht Britannia.

Market Bay or sands was used in the previous centuries for landing cattle from the islands of Coll, Tiree and Iona to join the drove roads which would lead them to the mainland markets. After being driven through Glen More,the cattle left Mull at Grass point on the south east of Mull landing again on Kerrera island and then boat to Oban. Retrace your steps to the car park 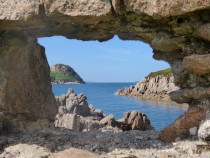 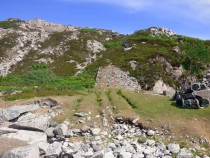